Skip to content
Home/Being Peace to Make Peace: How one ministry is equipping youth to challenge violence

Being Peace to Make Peace: How one ministry is equipping youth to challenge violence

Jesus, whom Isaiah 9:4 calls the “Prince of Peace,” says these words in the Sermon on the Mount, “Blessed are the peacemakers, for they will be called the children of God.” (Matthew 5:9)

Many read these words and wonder, “Where are the peacemakers today?” In Fort Wayne, there is a group of peacemakers at Southside High School.

In the summer of 2021 an initiative called the Peacemaker Academy was launched to equip high-school students disrupt patterns of violence and create a culture of peace.

The Peacemaker Academy is one of the initiatives of Alive Community Outreach led by Rev. Angelo Mante, Executive Director and UMC Deacon. These ministries were borne out out of heartache.

Pastor Angelo was born and raised in Fort Wayne. After living in Atlanta, Georgia, for a decade he and his family returned to Fort Wayne after the murder of his first cousin in September 2016. In the depths of their grief and loss, they sensed God calling them to help build a movement of peace in their hometown.

In 2017, Alive Community Outreach took shape to respond to the gap in the community for families and children affected by violence. In addition to the Peacemaker Academy, Alive Community Outreach gives “co-victim care” to families impacted by homicide and violence, community education, and violence prevention trainings. Their mission is “to cultivate a community of nonviolence through relationships and education.”

Pastor Angelo knew that supporting families would be central to their work. They began to ask, “What can we do to work toward a community where there are less families to support in the first place?” From this, non-violence entered the conversation.

Pastor Angelo was trained in non-violence through a Kingian Non-Violence Training at The Selma Center for Nonviolence, Truth & Reconciliation, led by one of Dr. Martin Luther King, Jr.’s righthand people, Dr. Bernard Lafayette.

The three–week Peacemaker Academy was held in the summer of 2021. The Academy was free for students, supported by a number of community partners, most significantly The Rotary Club in Fort Wayne.

Rising sophomores, juniors, and seniors who had demonstrated positive leadership and wanted to address issues of violence were invited to the application process. 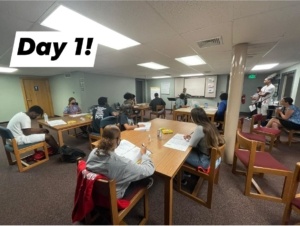 Held at the City Life Center, a ministry of Youth for Christ, the first week of the academy was an intensive focused on learning Kingian principles of nonviolence. The second week addressed root issues of violence in the community at Southside High School and asked students to dream about their vision for the school in a decade. The third week invited students to develop that vision into a plan.

A dozen teens took part in the Academy. Their plan put forth a Peace Committee at Southside comprised of administrators, teachers, and students.

As the 2021-2022 school year began, the graduates of the Peace Academy assembled the Peace Committee, whose goal is to, “to institutionalize non-violence.” The Peace Committee is entirely student-led and meets monthly at First Wayne Street United Methodist Church. 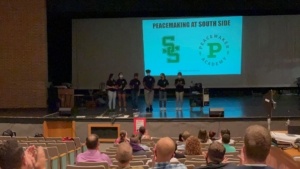 One of the key areas that the students are working to develop in an effort to institutionalize non-violence is In School Suspension (ISS). Currently ISS functions as a holding space where students are essentially separated from classmates. The students would like to see ISS become a constructive avenue for restorative discipline, rather than merely a way to treat symptoms.

At its heart, the Peacemaker Academy and Alive Outreach rest on Jesus’s promise in John 10:10. Pastor Angelo points to the statistics of violence in Fort Wayne, and the racism and poverty that are intertwined, as evidence that “the thief comes to steal, kill, and destroy.” Yet in spite of this, the promise from Jesus, “I have come so that they might have life in abundance” drives their mission forward.

Pastor Angelo said, “We’re not just trying to reduce violence. We’re trying to get at the root. In training students of the next generation to think of violence at that level, then multiplying that so we have a community of people trained to look at things at the root level, it means that they’re going to be able to come up with the solutions.”

The Peacemaker Academy’s approach looks at the dynamic movement between person, society, and culture. Pastor Angelo is encouraged to see young peacemakers willing to do the inner-work that peacemaking requires. The annual Peacemaker Academy will be held again in the summer of 2022, with applications opening up this winter.

“A lot of what we talk about in our non-violence trainings is the internal violence of the spirit and non-violence being a way of life, the way we walk and live. We have to deal with our own violence, our attitudes, our words, and how we love ourselves. There’s a lot of self-hatred and ways we allow things to fester inside of us and that comes out as violence if we aren’t caring for ourselves and tending to our own spirits. You have to be peace before you can make peace.”