Skip to content
Home/The Community’s Church: How one church is building relationships with their city

The Community’s Church: How one church is building relationships with their city

When Waterloo UMC was faced with the decision to close, they instead decided to seek God for renewal. They wanted to follow wherever God was leading them.

For one member, Susan, God opened her heart to children, which was surprising since she has no children of her own, nor would she say she was a “kid person.” As she drove by the church, she saw children playing outside, yet the church had only a couple of children who occasionally visited with grandparents. She tried to push down the nudge she was feeling, but she couldn’t shake the idea that they needed to do something for the children.

In June 2021, Pastor Sam Weicht came to the church for an Administrative Board meeting before his appointment began. As a high school teacher by day, he has always had a passion for youth. As he saw all of the children playing near the church he prayed, “What are we going to do? How are we going to do this, God?” At the meeting, he heard Susan talking about she was feeling led to start an after school program.

Connection Club is cultivating faith. Seven children have made professions of faith, and recently four sisters asked for Bibles so they could continue reading Proverbs, the focus of the Connection Club lessons, at home. All the children, largely unchurched and unaware of Bible stories, are learning about God and reading the Bible.

As the children are being discipled and growing in their faith, so also are the adults. There is a contagious wind of the Spirit flowing at Waterloo. A morning prayer group, which began during Lent, meets at the church for devotions and prayer and regularly has nine attendees. During the Sunday worship services, people are responding to altar calls and experiencing God’s grace. 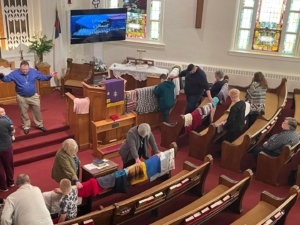 Growth in discipleship is more than inward, reports Pastor Sam; it’s also outward. With word of Russia’s invasion of Ukraine, the congregation started praying asking God what they could do. God laid it on their hearts to knit 100 prayer shawls.

The knitting team was comprised of three ladies, so they put out a call on Facebook for more knitters. Other local congregations joined forces, along with a Michigan high school’s art class and a church in Florida. In total, 158 prayer shawls were donated with calls coming in asking for more.

Pastor Sam said, “Ministry has exploded because a few people were faithful. They were faithful to the Connection Club and faithful through the prayer shawl ministry. We’re becoming the community’s church and building stronger relationships with the city. God is doing awesome things here.”