Churches and communities around North America are celebrating Black History Month in February. For Jeffersonville Wesley UMC in Jeffersonville, IN, their remarkable Black history is never far from their present as God uses it to both root their identity and propel them into their future.

In 1867, the formerly–enslaved Booker, Green, and Thelin families migrated from Kentucky and settled in Jeffersonville in southern Indiana. Their faithful prayer services were held in the home of two former slaves. A revival the next year grew their number and moved them to search for a building. With God’s provision, the congregation became owners of their building and land, a donation from staunch anti-slavery politician Dr. Nathaniel Field. The Holy Spirit was at work in their founding and is continually seen as the congregation’s history unfolds. 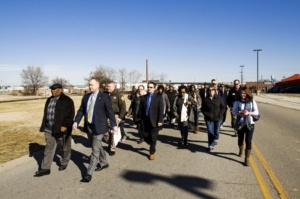 The Jeffersonville community march in honor of Martin Luther King Jr., led by the mayor, on their way to Wesley UMC.

Dr. Marion Miller, the current pastor of Wesley UMC, shared that 25 years ago the church was energized with a strong focus on mission outside of the church and vibrant discipleship inside the church. They had an outstanding traveling choir; they were strong in the United Methodist Men and Women, the former Indiana South Conference leadership, and the Black Methodists for Church Renewal (BMCR). The congregation was leading the Jeffersonville community with several landmark roles, such as the first black fire chief and the first black police chief. The congregation also contributed city politicians, local leaders of the NAACP, school principals, and teachers.

About five years ago—due to continual decline—the church was on the cusp of merging or closing. Dr. Miller was about to retire when she was asked by former Bishop Michael Coyner to take one more assignment. Quickly, she saw that the congregation’s strong leadership and formative history were fertile soil for a reinvigorated vision and mission.

As they looked to the past, they noticed the way throughout history Wesley UMC had focused on the inward and outward ministries of the church in equal measure. Together, they embarked on a strategic process in 2017 to develop their mission and vision. Then they got to work.

As they sought to live into God’s vision for them “to become a spiritually formed community of Christians seeking to win souls and make disciples for Christ,” the congregation was mindful of the need for spiritual formation of all ages.

One of the ways they lived into this was through “Mission Possible Kids,” a ministry designed to equip and empower children to do ministry. Children in grades 1-5 are led in Bible study, prayer, and then taught to serve. The children recently made blankets that were donated to Norton Children’s Hospital and to people who experience homelessness.

Their forebears foundation of prayer, scripture, and spiritual revival continually calls the congregation of all ages to stay close to Jesus. 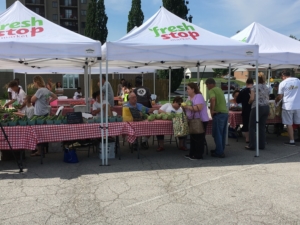 Outside the walls of the church, God opened the doors for Wesley UMC to meet a felt need in their community: access to affordable groceries. In 2017, Fresh Stop Market, a farmer’s market with reduced prices for low-income shoppers, opened in the parking lot of Wesley UMC. When Fresh Stop lost funding for its Jeffersonville location, the congregation collaborated with other local churches and ministries to bring a Kroger Mobile Market to the community twice a week.

During the COVID-19 pandemic, the congregation mobilized ministry to care for the souls inside and outside the church. They formed care teams of laity that ensured that congregants were getting contacted regularly so as to stay abreast of the happenings and communicate any needs. Wesley UMC also began the “Premiere Service,” a digital, pre-recorded worship service that is released through Facebook and YouTube. A local TV network also share it each week. 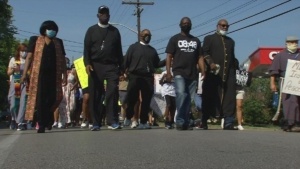 Most recently, in 2021, Wesley UMC embarked on a year-long quest for Spiritual Formation, Reorientation, and Activation. They are waiting on the Holy Spirit to lead them into the next five years. This quest is shared as multiple churches, largely White churches, journey together through Brian McClaren’s book, “We Make the Road by Walking.” The pastors have exchanged pulpits, also allowing Dr. Miller to share and celebrate the good works of God happening throughout Black history and at Wesley UMC. Each quarter, the churches collaborate together on a community event, such as the Halloween Trunk or Treat that brought over 150 people together.

“There are things we can do together that you can’t do alone,” says Dr. Miller.

As Wesley UMC looks to the past to follow God into the future, they are quick to see how God has been at work. As they celebrate Black History Month, they are reminded of the ways God has always provided resources, whether it be their first building and land or the equipment for the Premiere Service. As surely as God wrote the past, God is leading them into the future for more centuries of remarkable ministry.

“Wesley’s incredible Black history is 155 years strong,” says Dr. Miller. “After our founding in the home of two slaves, here we are 155 years later. God had a plan.”